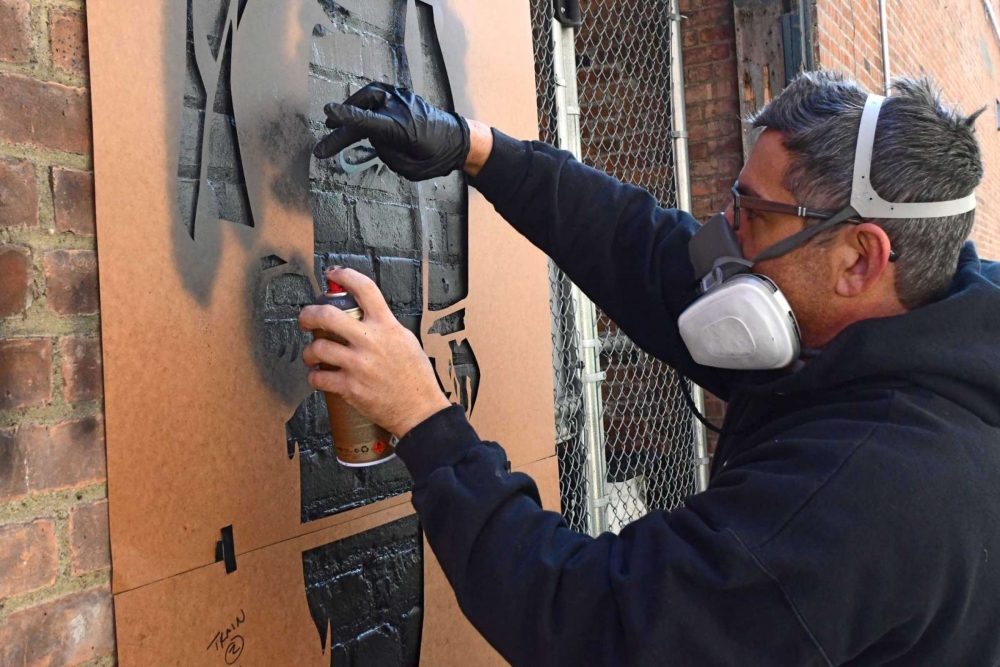 Artist Joe Iurato paints a mural in Franklin Alley on Friday, Oct. 9, 2020 in Troy, N.Y. The city's Franklin Alley project is getting closer to a finish. (Lori Van Buren/Times Union)

TROY – Many people looking down the restored Franklin Alley will see new sidewalks, a freshly paved street and the absence of the 16 commercial garbage dumpsters that dominated the connection between River Street and Broadway. Artist Joe Iurato views Franklin Alley differently. The alleyway is a canvas rich with textured brick surfaces, stockpiled with architectural history and a surface calling for stories of Troy past and present to be told.

“I’m a street artist. I work primarily with stencils, aersols,” said Iurato, 47, who hails from New Jersey. A white canvas doesn’t work for Iurato. The restored Franklin Alley is a canvas that he will bring to life over the next month as he installs 12 to 15 murals, stencils and sculptures down its length. The works Iurato is creating for the alley are inspired by his own experiences, Troy’s history and the people and places he has encountered and soaked up during his visits to the city to prepare for this project.

Iurato is collaborating with the Arts Center of the Capital Region to provide the transformative effort that will make the Franklin Alley Pedestrian Path stand out as an inspiration for discovering new life and purpose for the city’s 43 miles of alleys and providing a new downtown venue. The Arts Center is the force behind the $100,000 aspect of reinvigorating this downtown connector with a missing artistic quality that will stand out.

Iurato has found Troy to be a welcoming city.  Local artists have opened up to him. The Troy Boys and Girls Club members have inspired him. The city’s urban architectural fabric has stirred him. “Everybody is really enthusiastic. The enthusiasm for the project has really been inspirational,” he said.

Iurato will draw on his own personal story with pieces featuring his sons, Hudson, 12, and Maddox, 9. In the middle of the alley is another piece depicting a young Troy Boys and Girls Club member throwing a paper airplane with the message love on it.  Then there’s a stencil drawn from a newspaper advertisement for local rail travel.

Working up and down the alley, Iurato making use of the doors, windows and metal fixtures encompassing them into his art.  The existing mural that depicts farms, food and restaurants will be rehabbed and remain part of the alley’s developing artistic presence.

Iurato’s artwork will tie together the alley’s overall $330,000 transformation brought about by the Arts Center, the city’s agencies and local business and property owners.  The revitalization of the alley has seen it left clean and sparkling as the trash containers have disappeared to be replaced with businesses bringing their garbage out to the street daily for pickup.