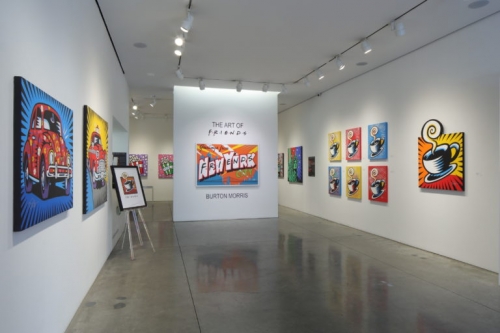 The Art of Friends by Burton Morris, exhibit at Taglialatella Galleries, New York.

THE ONE WHERE WE CELEBRATE 25 YEARS WITH ART

THE FRIENDS SITCOM IS CELEBRATING 25 YEARS OF FRIENDSHIP

The iconic show Friends made its television debut 25 years ago and we have been captivated by it ever since. Even 15 years after its final episode. The show made an impact on pop culture as we know it and brought many things to the Central Perk coffee table including Jennifer Aniston’s signature ‘Rachel’ hair cut. The show made an impact in the art world as well. In particular, for artist Burton Morris and his pop art designs.

In the third episode of the show, ​The One With the Thumb​, Ross Geller (played by actor, David Schwimmer) can be seen wearing one of Burton’s signature pop icon pieces, ​Big Hitter​ baseball player. The artist was unaware that his artwork was to appear on the television show until he received a phone call from his sister. He then placed a phone call to Warner Bros Studios and from there was flown to the studio for a meet and greet. That chance meeting lead to Burton’s artwork to appear in over 70 episodes throughout the show’s ten year run. Over a dozen of Burton’s original pop art paintings and designs were displayed, including ​Coffee Break,​ which is a steaming cup of coffee and ​King Kong, ​where he can be seen clinging to the side of the Empire State Building.

“I will never forget the moment in 1994 when my sister called me from California, saying she was watching a new television show called ​Friends​, and that one of the actors was wearing a t-shirt with my artwork of a big hitter baseball player.”

In recognition of the show’s 25th Anniversary, Taglialatelle Galleries revealed their newest solo exhibition of artworks from Burton Morris in association with Warner Bros, Inc. The exhibit opened with great success on September 19th and will be available for viewing until October 16th 2019. ​The Art of Friends​ showcases artwork that was inspired by Burton’s paintings that were displayed on the show in the Central Perk Coffee Shop. Fans of the show can sit on the famous couch from the Central Perk set where the cast members shared many cups of coffee, laughs and even a few tears. This exhibit is exclusive to Taglialatelle Galleries flagship location at: 229 10th Ave in New York. It displays not only the images that can be easily recognized from the show but also Burton’s newest works inspired by the show including original paintings, prints and multi-dimensional works.

You don’t have to ​”pivot“​, worry about “​moo points“​ or ​share your food​ to view this once in a lifetime event. Just make sure you get there before the doors close on October 16th. This exhibit is truly remarkable and one that any Friends fan would be lucky to view. In the words of Monica, “I know!’ And, make sure that ​they don’t know that we know they know we know.