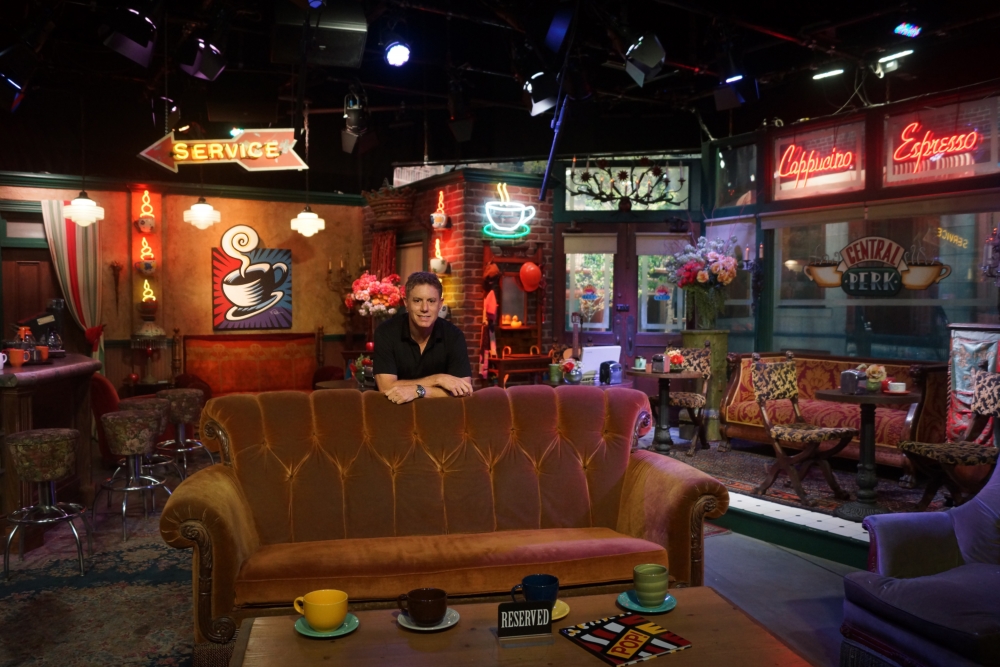 Burton Morris posing on the Central Perk coffee shop set from "Friends," with his original artwork displayed in the background.

They’ve been here for us for more than a day, a week, a month or even a year as the 1994-2004 NBC sitcom “Friends” notches a new milestone later this month, celebrating the 25th anniversary of its premiere on Sept. 22.

With recent hand-wringing upon the end of “The Big Bang Theory” that TV shows that bring together a broad segment of country may no longer be viable due to the overwhelming number of series available via broadcast, cable and streaming platforms, it’s worth remembering the same response accompanied the end of “Friends” in 2004.

While communal TV has diminished, the longevity and value of one-time hits is on the rise in the streaming era.

“Friends” cultivated enough of a new audience with its reruns on Netflix that the series recently sold for $425 million in a deal that will relocate the show from Netflix to WarnerMedia’s upcoming streaming service, HBO Max, which launches next spring. A similar deal will move “The Office” from Netflix to the upcoming NBCUniversal streaming service. The Los Angeles Times reports Sony, which owns "Seinfeld," has made a deal to move the comedy to Netflix when its current deal with Hulu expires in 2021.

Along the way there were couplings — Ross and Rachel — followed by uncouplings (“We were on a break!”), a monkey named Marcel, multiple Monica-prepared Thanksgiving dinners (Brad Pitt, then married to Aniston, guest-starred in one of those), Chandlerisms (“Could she BE more out of my league?”), Joey-isms (“How you doin’?”) and Phoebe singing “Smelly Cat.”

At the height of its popularity in season two, “Friends” drew an average of more than 29 million viewers per week, including almost 53 million viewers who watched a post-Super Bowl episode in 1996. (For perspective on how ratings have declined since the 1995-96 TV season, last season “The Big Bang Theory” was tops among scripted series, drawing an average of 18.1 million weekly viewers.)

So it’s no wonder that Warner Bros., which owns “Friends” and produced the series for NBC, is going all out in its celebration of the show’s 25th anniversary.

Opening of the first season of FRIENDS. All rights reserved to Warner Bros.

A “Friends 25” pop-up experience, which sold out before opening day, is in operation through Oct. 6 in Manhattan.

Assorted replicas of the show’s iconic Central Perk coffee shop orange couch are touching down around the world this month allowing fans to take selfies seated on it in locations as varied as the observation deck of the Empire State Building (Sept. 21-22), the Burj Khalifa in Dubai (through Oct. 16) and at Comic Con Africa in Johannesburg, South Africa (Sept. 21-24).

Fathom Events will screen episodes of “Friends” in movie theaters nationwide Sept. 23, 28 and Oct. 2. And Warner Bros. has created a free “Friends 25” app (compatible with iPhones iOS7 and above and Android phones; download at https://friends25app.com) complete with photo filters, trivia, wallpapers, recipes and more.

And it’s not just Warner Bros. that’s celebrating. Former Pittsburgh artist Burton Morris, whose paintings appeared on the walls of the Central Perk coffee shop set throughout the show’s run, will present “The Art of ‘Friends’” show at Taglialatella Gallery, 229 10th Ave., in New York, Sept. 19 through Oct. 16.

More than a dozen of Mr. Morris’ original pop art paintings and designs, created while he lived in Pittsburgh from 1994 to 2003, were featured over the 10 seasons “Friends” was on the air, and for his gallery show Mr. Morris will display several of these pop art icons, including the steaming coffee cup, the Statue of Liberty, King Kong and Uncle Sam in a show that mixes familiar images from the “Friends” set with new works inspired by the series.

In addition to “Friends,” another TV classic celebrates a significant anniversary this month: “The Brady Bunch” turns 50 on Sept. 26, and two digital subchannels available locally will celebrate with marathons of episodes.,

Burton Morris and the art of ‘Friends’

The native Pittsburgher's career took off after the popular television show began using his art on its sets. Now, 25 years later, the show, and his art, still resonate worldwide.

Pittsburgh-born artist Burton Morris will never forget that day in late 1994 when he received a phone call from his sister in California, sharing a strange and surprising tidbit that ultimately would change the course of his career.

Morris’ sister had been watching a new television show called “Friends” and one of the characters was wearing a T-shirt with a design Morris had created.

“I said, ‘I have no idea what you’re talking about,’” Morris recalled. But he did phone Warner Brothers the next day, and was improbably connected immediately to Kevin Bright, one of the creators of the iconic series, which would go on to be ranked as the 26th greatest show of all time by Rolling Stone.

That exchange set off a relationship that led to the worldwide recognition of Morris’ work, which will be celebrated at his art show “The Art of Friends,” opening on Sept. 19 at the Taglialatella Gallery in Chelsea, New York City, and running through Oct. 18. The art opening coincides with the 25th anniversary of the premiere of “Friends.”

Morris was living in Pittsburgh in 1994, creating pop art pieces, including a line of T-shirts. While in production for the third episode of “Friends,” one of the production workers happened to be wearing a Morris shirt depicting a pop art rendition of a baseball player. The shirt caught the eye of actor David Schwimmer, who played Ross on the show.

“There was a scene where they had just come back from a baseball game they had been playing, and he (Schwimmer) apparently asked the guy, ‘Hey, can I wear that shirt? I think it is a great shirt for this scene.’ So I guess the guy gave him the shirt to wear, and he wore it on the show, and then it went public,” Morris said.

After speaking to Bright on the phone, Morris was invited to the set of “Friends” should he ever be in L.A. As it happened, Morris had been planning a trip to Southern California just two weeks later, and stopped by the set.

“I got to meet all the actors and hang out with everyone,” said Morris, whose family members are longtime members of Congregation Beth Shalom. “We were all the same age, and they were all brand new, so I didn’t know who any of them were.”

There was a Pittsburgh connection, though, as actress Courtney Cox, who played Monica in the show, was dating Pittsburgh-born actor Michael Keaton at the time, according to Morris.

Bright asked Morris if he wanted to hang some of his work on the set in future episodes, which led to more than 50 of his pieces, over the course of 10 years, being featured on a television series that remains popular in syndication to this day.

“The first piece of mine was a big toaster painting that was in Central Perk (the fictional coffee shop where the friends on the show congregated) and currently it resides in the Heinz History Center in Pittsburgh,” Morris said. “In every season, one by one they started using more of my work. It wasn’t on every episode, but every season they would change it up, so they might have a piece on for three to four episodes, then change to something else.”

Memorable paintings hung in Central Perk included those depicting the Statue of Liberty and Uncle Sam.

But “the biggest one people remember was my coffee cup because it was such a staple, it fit perfect,” Morris said.

Morris refers to the longevity of the show’s reach as “mix of luck and good fortune, and I call it perseverance, over the years that the show took off,” said Morris. “No one would have known this show would still be lasting and reaching new generations.”

As a result, people “who weren’t even born when the show was starting,” are relating to “Friends,” and are seeing Morris’ work prominently displayed, he noted.

One of the aims of a pop artist is to get their work integrated into mainstream culture, Morris explained.

“‘Friends,’” he said, “helped get my work in front of people I could never have reached. Literally, when I’ve had shows in Asia, Europe, they’re like, ‘Oh, you’re the artist of ‘Friends,’ we’ve seen your work.’ Because my work is pop art and has mass appeal, it is universal. It’s all about the objects and the ideas that are very positive and very simple and graphic, but it hit home with that show, and people feel comfortable with it.”

All the cast members and creators of the show own pieces of Morris’ art, as does Warner Brothers, he said.

“I’ve been very fortunate,” the artist acknowledged. “Because of this, it opened up doors for me to do the Academy Awards, the Olympics, I worked with President Obama for eight years. This is all because my art got out to the public through television, which I could never have dreamed of.”

Although his art has appeared on the sets of about a dozen other television shows, including “Entourage” and “Just Shoot Me,” he attributes his mass appeal to the exposure he received from “Friends.”

For his new gallery show, Warner Brothers is providing one of the original couches from the Central Perk set for the opening, “so people can come in and take pictures,” he said.

New works that are Friends-oriented, will be displayed at the gallery, including a series of coffee cup paintings, Statue of Liberty paintings, and Uncle Sams. Morris will also be debuting his first sculpture — not surprisingly, a coffee cup.

Toby Tabachnick can be reached at
ttabachnick@pittsburghjewishchronicle.org.