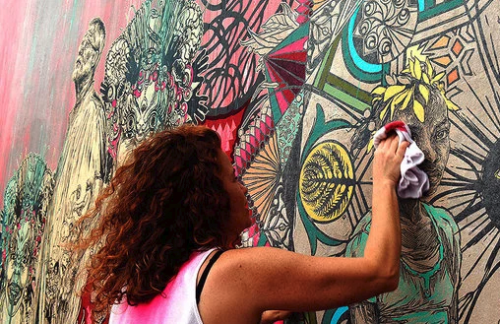 Badass Woman spotlights women who not only have a voice but defy the irrelevant preconceptions of gender.

Swoon’s ethereal paper sculptures have hung in New York’s MoMA and Los Angeles’s MoCA, but you’re just as likely to find her work on a brick wall in a forgotten street.

The artist, born Caledonia Curry, is a study in contrasts. A classically trained painter-turned-street art heavyweight, she's best known for her breathtaking, goddess-like cut-out portraits, which have found fans in the fine art and graffiti worlds alike. Wheat pasted in cities across the world, they're raw but also dreamy and—unlike most street art—boldly feminine.

“At first I really fought it. And then I was like, ‘You know what? Fuck this!’” Swoon says of her soft aesthetic. “Femininity and delicacy, all of these qualities are not respected on a grand scale. We don’t really have a cultural history of [appreciating] female genius, let’s call it, people who fully embody their art and their work in ways that express their femininity.” So she carved out a genre where girlishness and grit go hand in hand.

Swoon, 40, describes her early childhood in Daytona Beach, Fl., as chaotic. Her parents were both heroin addicts who struggled with mental illness and suicidal tendencies, themes that recur in her work. But her preteen years were characterized by more stability. Her father got clean, and when Swoon was 10, her mother enrolled her in an art class for retirees; somehow, there she found her place. Art became a mode of expression, therapy, and activism for Swoon, who launched an ongoing building and beautification project in Haiti after the 2010 earthquake. Below, she lets us into her colorful world—including her unlikely embrace by the boys' club and that time she illegally sailed through Venice on a raft made of garbage.

Her first big fail: "Artists will tell you they were artists their whole lives," says Swoon. But she points to the moment she stepped into that art class as a 10-year-old as her awakening. "The 80-year-old retired painters adopted me; they taught me how to paint. I’ve been a focused, confident artist because of them." Years later, thought, her first attempt at street art was a disaster, she recalls. "I worked on it for a couple months, and then I went and tried to put it outside and it was a total failure. I must have been 22, and it was a linoleum block carving portrait. I didn't know what I was doing. It came down immediately," she says with a laugh. "But I kept going."

From hideout to breakout: Swoon's second attempt was more successful. By the early aughts—shortly after she graduated from Brooklyn's prestigious Pratt Institute—her wheat-pasted murals had gained widespread recognition, though she kept her identity hidden behind the moniker Swoon. She was working as a waitress and selling art out of her apartment, when a friend in the art community told her that Jeffrey Deitch—the experimental curator whose gallery served as a launchpad for the most exciting, young talent—had been asking around, trying to connect with the mysterious Swoon. In 2005, they unveiled their collaboration: Swoon filled Deitch's gallery with a sprawling dreamscape of paper sculptures that rocked the art world.

"Strangely, the Museum of Modern Art contacted me before Jeffrey did," she says of her sudden popularity. But Swoon didn't quite understand, or at least believe, that they were interested in her work. "I was like, 'Why are you contacting me?' They were like, 'Can you bring some art by?' And, I was like, '...For what?'"

Not one of the boys: Swoon is one of the only, and arguably the most prominent, women to achieve her level of success within the street art genre. But the boys' club was surprisingly welcoming. "I think people expect that you’re going to get a lot of sexism, but for the most part everyone just wanted to make shit, and they were excited, and everyone just supported everyone else. I honestly think that there’s a lot more sexism higher up in the art world than there was when I started out making [art] on the street," she says, adding, "It is a little weird that now I make such feminine work a lot of the time because I was a total tomboy. My proudest accomplishment is being an artist that young women can look at and say, 'I can do that.'"

Battling mental illness: Swoon's biggest obstacle has been "my own mind," she says. Watching her parents struggle with addiction and mental illness, at one point she thought her life would inevitably take a similar path. "When you have trauma at a young age, which I did because my family was so unstable, it starts to come out later in life. So in my 30s I started losing it. I couldn’t live with myself, so I had to do all this deep work. I had to start going to therapy, I was reading, writing, journaling, researching trauma to try to be a person that feels grounded."

Eventually, she was able to make peace with her turbulent childhood, even letting go of long-held resentments. "That has been a long process and has been a lot of uncovering." A large part of that, for Swoon, was channeling her complex emotions into her work. "It’s really about the discovering [what you're feeling] in the first place. Once you discover it, turning it into art—that’s how I live; that’s who I am."

Pranking the Venice Biennale: Swoon has shown her work in various settings, from Miami's Wynwood Walls to her total takeover of the Cincinnati Contemporary Arts Center. But her most outlandish project yet was part performance art, part social experiment, and part fun-loving, dumpster-diving stunt. Along with a band of anarchist artists, she designed a fleet of ships constructed entirely of New York City trash (think steampunk Captain Hook). The merry travelers began their journey on the coast of Slovenia and crashed the 2009 Venice Biennale, inviting onlookers lining the canals to hop onboard and party with them. Customs was, to say the least, confused.

Art as activism: Swoon believes that "spaces of wonder" can transform communities in crisis, which is the mission of her organization, the Heliotrope Foundation. After the devastating earthquake that hit Haiti in 2010, she started a sustainable building project in two local communities to provide much-needed housing and bring color back into the leveled towns, which would become the first initiative under Heliotrope. She's also now working to restore an abandoned church in Braddock, Penn., repurposing it as an artist-run ceramics workshop and community center.

Looking ahead: With her wheat-paste murals, lace-like sculptures, garbage boats, and performance art, Swoon is a true multimedia artist. Up next: "Some time working in experimental film."