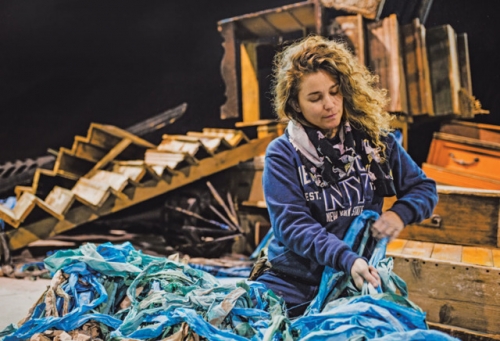 Swoon with her set for Cincinnati Ballet’s New Works
Via Hailey Bollinger, CityBeat

As street art becomes so accepted and popular a genre that its most outstanding practitioners have developed international followings, one of the foremost — a female artist known as “Swoon” — has two upcoming projects in Cincinnati.

The first is a collaboration with choreographer Jennifer Archibald for the Cincinnati Ballet’s The Kaplan New Works Series, which opens Thursday at the Aronoff Center’s Jarson-Kaplan Theater and continues through April 30. All four of the pieces in the program are by women choreographers. The second project is a major art event — the Contemporary Arts Center says it will open a museum survey of her career to start the upcoming exhibition season. Called SWOON: 2002-2017, it opens Sept. 22 and will be up through Feb. 25, 2018.

Born Caledonia Curry, Swoon began wheatpasting life-size woodblock-printed and hand-painted portraits of friends and family onto walls in New York City in 1999, when she was just a college student studying art at Pratt Institute. Her work quickly gained the attention of pedestrians and gallerists alike.   “First and foremost I am a drawer of portraits,” she says.

Using humble materials, temporary approaches and by “getting up” enough work on the street, by the mid-2000s Swoon was becoming familiar enough that she had already sold pieces to New York’s Museum of Modern Art and had a solo show at Deitch Projects gallery — all this merely a few years out of college.  In addition to more traditional gallery shows, Swoon has also initiated long-term site-specific artistic endeavors in places like Haiti, New Orleans and Braddock, Pa., which use art as a way to galvanize communities.

Like Swoon, choreographer Archibald has worked widely. She’s the founder and artistic director of New York City’s Arch Dance Company, and she’s just been named resident choreographer for Cincinnati Ballet’s upcoming season. Archibald says via email that she and Swoon met in New York last summer. They’ve been collaborating virtually ever since, sending each other photos and videos and tossing ideas and materials back and forth. For Archibald’s New Works piece, entitled “Never.Nest,” Swoon repurposed elements from a raft that she floated on the Adriatic Sea. The seaworthy craft was made from discarded furniture and architectural objects that the artist and her crew had gathered from abandoned warehouses and garbage piles along the coast around Slovenia.

The conceptual framework of the collaborative dance piece draws on that. “(It’s about) climate change and coastal cities and our relationship to nature in this moment,” Swoon says. “And (also) our need to viscerally process what’s happening.” The technical challenges for this particular project are specific to the theater. Grappling with issues of scale, time and mobility requires work.
“It can be fun creative problem-solving,” Swoon says. “Or maddening. Or both.”
“Usually both,” she adds, with a laugh.

The first time Swoon came to Cincinnati was in 2004 for the trendsetting Beautiful Losers: Contemporary Art and Street Culture exhibition at the CAC. Her work was actually exhibited at now-shuttered Publico gallery, one of several satellite locations around the city that hosted the various participating street artists. It should come as no surprise then that the CAC was interested in bringing Swoon back for a solo show of her work. There is already a committed base of supporters for this kind of art, and what Swoon does with her intricate portraits and installation work is different than other street artists.

The survey of her works that opens in September at the CAC will offer her at chance to reflect on her career. She also has plans to go “off-radar” for at least a year after the survey show. Then, when it comes time to tackle an installation again, Swoon says she will be looking for the next big challenge. “I kind of know what I’m doing and that’s just not good for an artist,” she says, “or else you’re not living a truly creative life.”