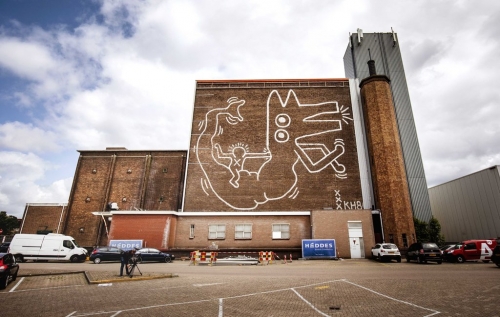 A 1986 mural Keith Haring painted on a storage facility of the Stedelijk Museum Amsterdam. After the museum vacated the building, the work was covered in aluminum cladding.

Keith Haring Mural in Amsterdam Is Uncovered After Nearly 30 Years

Haring visited the city for a solo exhibition at Stedelijk Museum Amsterdam in 1986, four years before his death from an AIDS-related illness. While there, he painted a colorful canvas, crowded with his emblematic figures, for the interior of the museum.

But he also asked the curators if he could leave behind a more public work, and he was offered a brick wall on the outside of the Stedelijk’s storage facility.

Over the course of a day in March, Haring painted a monumental hybrid creature — part dog, part fish — with one of Haring’s signature figures riding the beast. While his work from that period was generally colorful, this mural was made of spare white lines of paint.

The artist Jan Rothuizen, who knew Haring, described stopping to see the work’s progress and witnessing the American artist struggling in the cold to get the paint to hold to the brick. But he finished it in one long attempt:

“It was a rough job, but with his spirit, he did it in a day,” Mr. Rothuizen said by telephone.

When the museum vacated the warehouse, the building was transformed into a cold storage unit, and aluminum insulation panels covered the mural in 1989.

Ms. Middel came across an old photograph of the mural four years ago. “I thought, oh my goodness, what happened to it?” she said in a telephone interview, adding that she had long admired Haring.

Haring’s work was exhibited in Europe relatively early in his career, and “growing up as a kid in the ’70s and as a young teenager in the ’80s,” Ms. Middel said, “Keith Haring was for me the closest we could get to New York.”

Exploiting the increased interest in Haring’s work in 2017, when the colorful canvas he painted during his 1986 visit went back on view after restoration, Ms. Middel joined with the Haring Foundation, the gallerist Olivier Varossieau and the Stedelijk to organize the removal of the panels.

“You can’t imagine when the first pieces of cladding came off, and you see the first stripes of Haring’s painting appear,” she said of the reveal on June 18. “Hey, we have a Haring!”

The mural will be restored by Will Shank and Antonio Rava, who also worked on Haring’s “Tuttomondo” in Pisa, Italy, and on the artist’s 88-foot-high “Tower” in Paris.

And the meaning of the hybrid creature? “It’s an awkward thing, isn’t it?” Mr. Rothuizen said with a laugh. “When we think about Keith Haring, we think of the figures, and we think it’s really clear. But when we take it one step further, it becomes complicated.”

The full article can be viewed here at the New York Times online.