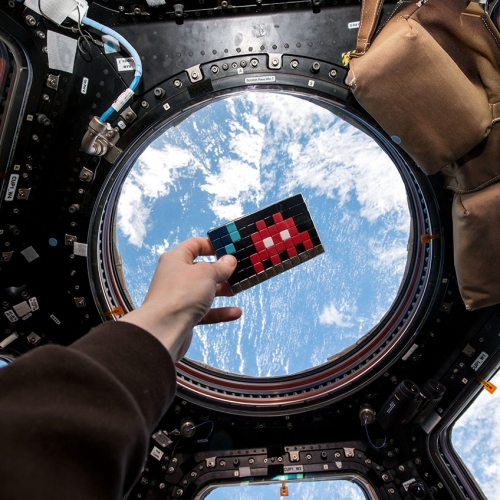 Despite the significant proliferation of his fan base along with his growing art portfolio, Invader remains to be one of the most elusive figures of the contemporary art market. Taking a page from Banksy’s book, Invader has chosen to hide his identity from the public as a way of liberating his art from tradition; Invader digresses from the road of conformity by prohibiting any strictly biographical reading of his work, allowing his pixelated characters to speak for themselves. When the artist’s own image is mediated through a television screen he too chooses to appear pixelated—as seen in Banksy’s documentary Exit through the Gift Shop (2010) made by Thierry Guetta aka Mr. Brainwash (who also happens to be Invader’s cousin).

The artist’s chosen pseudonym, appropriated from TAITO’s “Space Invaders”— a popular video game in the seventies and eighties—plays on the aesthetic and theoretical strategies at work in his artistic scheme. His earliest street mosaics, which he unveiled in his first ‘invasion wave’ of Paris in 1998, are composed of individual tiles or pixels that mirror the unsophisticated appearance of the world behind the arcade screen. Invader frees these characters from their technologized existence by scattering them in large numbers across large cities—the more of these mosaics Invader can place in each location, the higher his “score.” In his own words, his invasions should be considered “contemporary art, a game, graffiti, street art… and much more.”

A recent surge of interest in Invader’s work can be attributed to the playfulness and nostalgia embedded in his work, which attests to his objective of “leaving a print not only on the streets but also on the minds.” The intention of permanency demanded by the technical application of Invader’s street mosaics allows for a concrete connection between his arcade-utopia and reality, literally invading our space with his creations and perpetually altering its form.

In 2004, Invader began to experiment with a new aesthetic, taking popularized images—often from iconic films like A Clockwork Orange (1971) and The Shining (1980), to name a few—and layering the universally familiar Rubik’s Cube façade over them. These works, as well as three-dimensional sculptures modelled after the toy, make up a new style Invader labelled “Rubikscubism.”

The immobile nature of this street art, makes the few printed editions of Invader’s work all the more valuable. As one of the leading venders of Invader’s work Taglialatella Galleries has built an exceptional collection over the years, culminating in a solo exhibition in May, 2017 titled, Game On. The works currently displayed in our Chelsea gallery represent both the original TAITO video game characters that Invader began with, as well as popularized film images that he imprisons within the blocks of his Rubik’s Cube aesthetic—always blurring the lines between game and reality.

“Space2” Invaded the International Space Station (ISS), aboard the European spaceship ATV-5 in 2014.

Undersea, off the coast of Cancun Bay, Mexico in 2007.

On the Hollywood sign in Los Angeles, California in 1999.

For all inquiries about Invader or any other artists please contact us at info@djtfa.com

All images for this article are courtesy of space-invaders.com