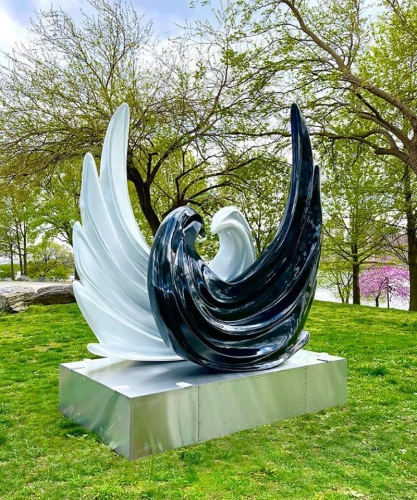 Without question, Rubem Robierb, a Brazilian-American visual artist, is one of today’s most prolific creators. Internationally known for his thought-provoking work, Robierb is often inspired by the social causes of our modern times, among them, racial inequity, support for LGBTQ rights, the Black Lives Matter movement, and gun violence.

On May 4, Robierb will display his latest creation — a 10 foot, painted fiberglass and stainless steel sculpture entitled “Peace Makers.” on New York City’s Randall’s Island Park and will be on view from May 2021 – May 2022 by the Park’s 103rd Street Footbridge. This prolific piece will be exhibited along with Robierb’s “Dream Machine II” as part of NYC Parks’ Art in the Parks program in partnership with the Randall’s Island Park Alliance.

According to the artist’s press release:  “Peace Makers” was inspired by recent and ongoing events and protests for racial justice and is a tribute to Peace Makers worldwide, who tirelessly fight for peace and justice. The sculpture is a dynamic form that represents the spirit of different cultures and races while recognizing the potential for unity in the name of progression and peace."

I first discovered Robierb’s incredible work about six years ago when I visited a live art exhibition featuring him and master screen printer Gary Lichtenstein. The two had come together in a mixed media collaboration at Lichtenstein’s Jersey City, New Jersey-based studio. They invited the public to watch as they created screen-printed pieces based on Rubem’s stunning butterfly images. A prominent exhibition of his remarkable Bullets and Butterflies series also opened at Taglialatella Galleries in New York around this time.

The more I learned about Robierb’s work, it became clear— he’s always intentional with creations that challenge you to think and often through juxtaposition, as witnessed in his remarkable “Bullets and Butterflies” series. As stated on Rubem’s website.”

Today, Robierb transcends galleries. His majestic sculptures are in a myriad of destinations, from luxury hotels to public courtyards. And in 2017, he reached Pop art icon status when his “Dream Machine” sculpture was proclaimed the most photographed artwork on Celebrity Cruise Lines’ Edge, their first billion-dollar cruise ship.

A few other notable Robierb pieces I encourage you to discover in addition to “Peace Makers” are “Healing Heart” and “Empower Flower.” Robierb currently lives in New York City and Miami, where he maintains a studio in South Beach. His work is focused on contemporary American Society, emphasizing the socio-cultural issues that define our current times.

*Rubem Robierb’s next gallery exhibition is scheduled to open on Thursday, May 6, at Taglialatella Galleries, New York.