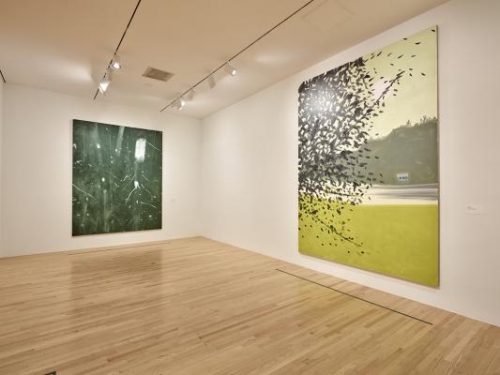 Installation view of "Focus on: Alex Katz" at the Dallas Museum of Art.

A focused installation of works by the 92-year-old American painter Alex Katz, one of the most recognized and widely exhibited artists of his generation, and presented in celebration of his appearance in Dallas as the honored artist at the 2019 TWO x TWO for AIDS and Art fundraiser gala in October. This unique presentation brings together a number of themes that characterize Katz’s work: portraits, landscapes, cut-outs, and party scenes. The exhibition will include a painting that is planned to be acquired by the Museum and four from local Dallas collections.

Join Hilde Nelson, the DMA’s Curatorial Administrative Assistant for Contemporary Art, for a lunchtime talk about two exhibitions focused on Icelandic artist Ragnar Kjartansson and American painter Alex Katz. While distinct, both exhibitions highlight work from Dallas collections and explore the theme of autobiography in the artists’ work.

Dallas exhibition celebrates Alex Katz, who defied the trends and is as creative as ever at age 92
The painter, featured at the Dallas Museum of Art, has outlasted many art-world cycles of fashion, continuously rising in esteem, while never quite having reached the spotlight of center stage.

Alex Katz has been a mainstay on the New York City art scene for over half a century. (Vivien Bittencourt / Dallas Museum of Art)

When the young Alex Katz had a New York solo exhibition in 1959, it was still the heyday of abstract expressionism, and Katz’s defiantly figurative work was met with skepticism among that crowd.

But the influential painter Willem de Kooning told Katz at the opening that he liked the work, and Katz has never wavered in his commitment to his spare, restrained figurative style.

Now 92 and as creative as ever, Katz has outlasted many art-world cycles of fashion, continuously rising in esteem, while never quite having reached the spotlight of center stage. Happily, the five top-notch paintings in his “Focus” exhibition at the Dallas Museum of Art offer an efficient introduction to this elder statesman of downtown New York.

The centerpiece of the show is the remarkable, highly unusual One Flight Up (1968), a kind of group portrait of 37 individuals representing a cocktail-party cross section of the Manhattan literati of that time. It was painted in the same year that Katz and his wife, Ada, moved into the SoHo loft where they still reside today.

This artwork is not a single painting, but a collection of 31 individually painted metal panels (some of which depict a couple, rather than a single person). Each panel is carved into the shape of its figure, then painted to show the head and shoulders of its subject. Both front and back are painted, so that we can see a face from one side of the gallery, and the back of a head from the other.

In the DMA's Hoffman Galleries, the figures are arranged on a table so that their heads reach about 5 feet high, allowing us to look a bit downwards on the scene. The overall effect is uncannily like dropping in on a cocktail party, “one flight up” in a SoHo loft, as the title suggests.

Alex Katz's One Flight Up, a 1968 oil-on-metal piece, makes viewers feel as if they're looking down on a cocktail party, (Mark Woods / Dallas Museum of Art)

Aside from being unfashionably figurative during the heyday of abstraction, Katz has had to occasionally receive the faint praise of being a "society painter," as if, like John Singer Sargent, his great gifts were applied to less weighty subject matter than they ought to have been.

Against this charge, curator Robert Storr has defended Katz by pointing to the ethnic and economic diversity of his subjects. But more fundamentally, one might say: Portraits are an essential part of the historical record, and they offer irreplaceable insight into the character of their subjects. Painting society portraits is, in fact, an honorable and worthy occupation for an artist.

Katz will be in town as the designated honoree at this year's Two x Two for AIDS and Art 2019 Gala and Auction on Oct. 26. Viewing this collection of top-notch works from the Hoffman collection in the Hoffman Galleries, one is reminded of the outsize role that a few stunningly generous patrons play in the Dallas arts community. Not every city enjoys this generosity.

Crosslight, painted this year, is another nice surprise, even for Katz devotees. For the last half-century, the prolific artist has rarely, if ever, painted something as abstract as this — but it works very well, and its color palette ties the painting to the other works on view.

Although this painting originates in a classically impressionist context of light and nature — the stunningly beautiful forests surrounding Katz's longtime summer home in Lincolnville, Maine — it doesn't really look like an impressionist painting.

Instead, with a significant amount of blurring, layering and emphasis on individual brushstrokes, Crosslight is much closer to Gerhard Richter's heavily mediated, photographically based style of abstraction than anything we might associate with Katz's New York peers (or with the original impressionists).

If you’re familiar with one work by Alex Katz, it’s probably a portrait of Ada, his wife of 61 years and most frequent muse. And, along with the more outside-the-box works, this show does include a portrait of Ada, but it, too, confounds expectations.

In Ada (2016), her figure, wearing a sun hat, sleeveless top and cropped pants, walks into the distance against a solid green background. But there are six of her — identical figures, repeated left to right across the canvas. It's hard not to see the solid background and multiple figures as a sly nod to Andy Warhol's use of the same elements in his Pop Marilyns and Elvises — and a reminder not to underestimate Katz's sharpness.

Ben Lima is a Dallas-based art historian and the editor of Athenaeum Review, the University of Texas at Dallas journal of arts and ideas.

Crosslight, a 2019 oil-on-linen piece, is among the more abstract works that Alex Katz has produced in his long and prolific career.(Thomas Müller / Dallas Museum of Art)