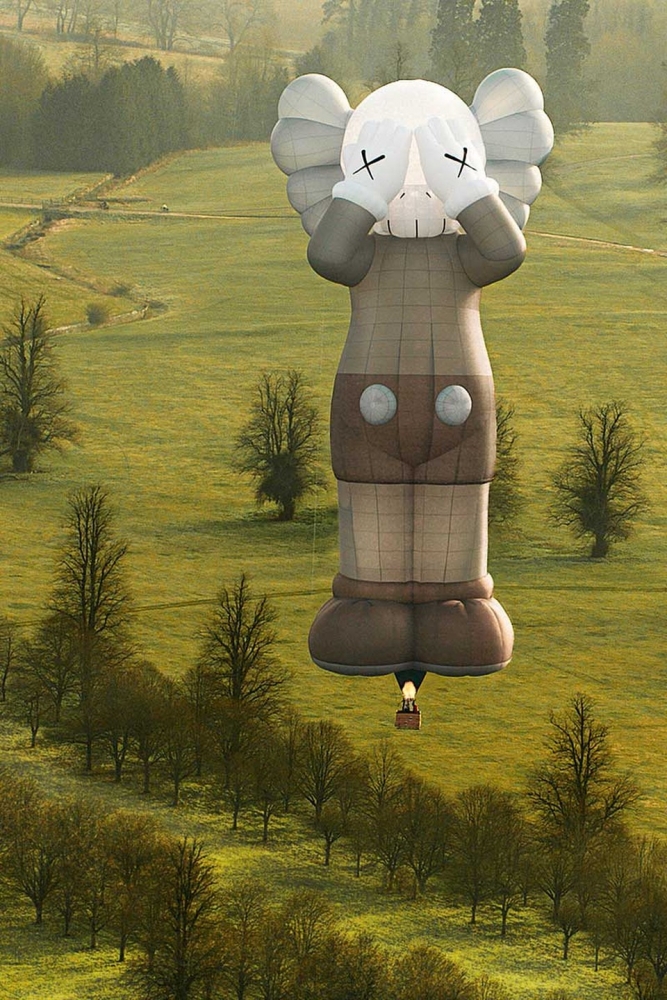 He has appeared in the foothills of Mount Fuji and in the middle of downtown Taipei. His reclining figure has even floated placidly on Seoul's Seokchon Lake and in Hong Kong's famous Victoria Harbour. Now, American artist KAWS' signature character, Companion, is set to take to the skies across several world cities -- as a hot air balloon. On Monday, KAWS, whose real name is Brian Donnelly, announced plans to fly his huge new sculpture above major cities in countries including Australia, China, Turkey and Spain. The exact schedule will be dictated by demand for flight packages, which will see groups of two or three ascend in the balloon for an as-yet-undisclosed price.

Images from a recent test flight near Bristol, UK, show an inflated Companion covering his eyes as he soars high above the ground. At 42 meters (138 feet), the floating artwork is about at tall as a 15-story building.

As well as offering a unique experience for fans, Donnelly said he wanted to provide a surprising moment for people on the ground."It really will be an unexpected thing in the sky," he said on a call from New York City. "To have a work that suddenly interrupts your sight line for a few minutes, going through different cities in the world, is, for me, very exciting."

KAWS, who started out as a graffiti artist, now straddles the worlds of art, design and pop culture. He created Companion over two decades ago, with his other well-known characters including Accomplice, Chum, Bendy and BFF. In addition to large-scale sculptures, Donnelly has made his name through toys, merchandise and apparel collaborations with the likes of Nike and Uniqlo. His latest project is the result of an ongoing partnership with Hong Kong creative studio AllRightsReserved. The hot air balloon will spend approximately one month in each chosen city, beginning in late 2021. Flight packages, which come with a certificate, uniform and KAWS collectible, can be purchased using various cryptocurrencies including Bitcoin, organizers confirmed.

Donnelly said that the project offered a way for him to contend with the restrictions brought about by the Covid-19 pandemic. "As an artist we're just trying to navigate around the situation," he said. "So many things have gotten canceled, and there are so many different considerations with travel and meeting in groups. "I thought the balloon would be a great object to create something across a landscape that people can experience ... rather than having an exhibition-type piece that everyone gathers around."

The hot air balloon marks the latest installment of Donnelly's "KAWS: Holiday" project, which has seen Companion figures floating over New York's Times Square (as an augmented reality sculpture) and blasted more than 25 miles into the Earth's stratosphere. The artist said he is yet to decide which frontier the character is headed to next. "When I do these projects it's not like I'm searching out another medium to work in," he said, adding: "Maybe we're going to have to start going underwater."