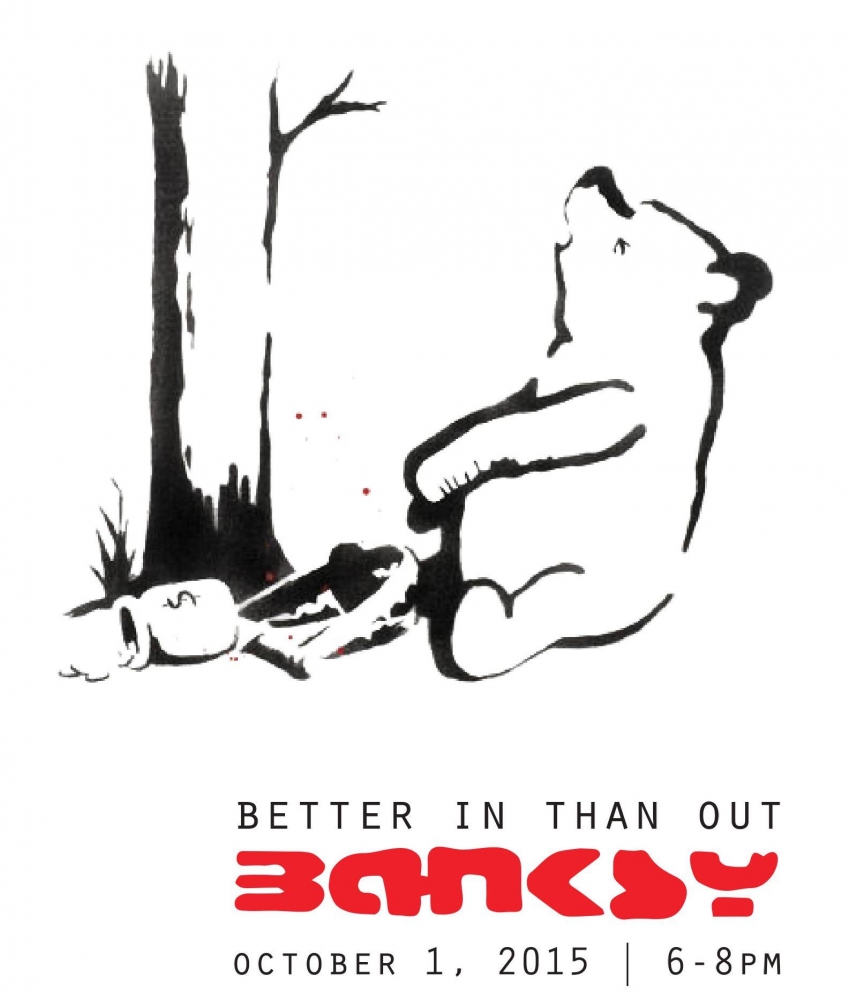 Celebrating the two-year anniversary of Banksy’s month-long residency in New York, entitled Better Out than In, Taglialatella Galleries presents a comprehensive exhibition of Banksy’s artwork spanning a full decade. The month-long exhibition will include works on paper, unique paintings and an original graffiti wall, curated and amassed by our Director of Eastern Operations, Nikola Mihajlovic. The collection will comprise of approximately 50 works beginning with an early-career canvas painting created in 2000 and rounded out by prints published in 2010, the date of Banksy's most recent limited edition release for public acquisition.

Banksy has become synonymous with street art; legendary through controversy and mystique, the proverbial masked man has been prodding authority for over a decade while simultaneously inciting a palpable intrigue from the masses. By conveying his simple yet powerful messages, Banksy's imagery from the streets has become iconography of today’s pop culture. Whether his subjects are that of social commentary, sarcasm, anti-establishment, mock-propaganda or a call for governmental anarchy, Banksy seems to capture an audience from all backgrounds regardless of sex, race, nationality or economic status. Although nothing is safe from Banksy’s wrath, it is safe to say that unlike any other artist in the world, Banksy has propelled a following and a market unlike any other in the art world.

Many Banksy fanatics are eager to visit his public graffiti works around the world, such as his current installation of “Dismaland - Bemusement Park”, a hilariously deranged theme park set in the town of Weston-super-Mare in southwest England (http://www.banksy.co.uk/index2.html). What some of his followers often do not realize is that Banksy has created, and recreated, many of his famous images as paintings, limited edition prints (less than fifty total images produced), and even sculpture, that have been distributed in and coveted by the international art market. Taglialatella Galleries is pleased to bring Banksy to you in exhibition form, displaying works that Banksy created for fans and collectors to enjoy worldwide.

Please join us for the opening reception on October 1st, 2015, at Taglialatella Galleries, 231 Tenth Ave, New York, NY 10011. The doors will open at 6:00pm RSVP is strictly required. A limited edition exhibition catalogue will be available for sale, for guests at the opening reception only. Please inquire for details—info@djtfa.com.