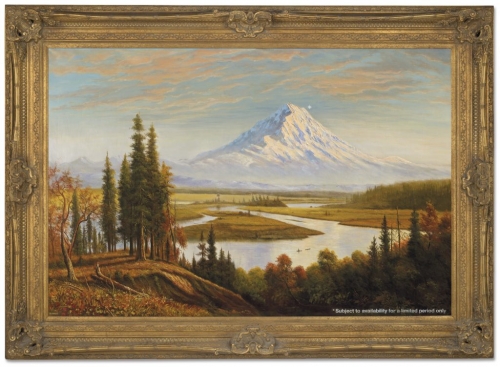 Called Subject to Availability, the work is a Banksy intervention on version of an 1890 oil painting of Mount Rainier National Park by Albert Bierstadt, who was a member of the Hudson River School. The street artist inserted an asterisk onto his own version of the idyllic landscape painting, which includes the note: “subject to availability for a limited period.” The work, which was included in the artist’s legendary exhibition at Bristol Museum & Art Gallery, will be one of the highlights of the Christie’s 20th century sale on June 30 in London.

“Banksy’s witty dialogue with the art historical canon brings the painting sharply into the current context of the global climate crisis,” Katharine Arnold, the house’s co-head of postwar and contemporary art, tells Artnet News. Like Banksy who has made poignant works about industry-related pollution, Bierstadt was similarly concerned about the climate, and had campaigned against the destruction of nature during the industrial revolution.

The lot is worth watching as it was included in the artist’s seminal exhibition “Banksy versus Bristol Museum” in 2009, during which the artist installed 100 works among the gallery’s permanent collections. The exhibition was a historic and hotly attended cultural moment for the street artist’s hometown. It remains the only full museum exhibition authorized by the artist who has since made a point of distancing himself from a spate of unauthorized museum exhibitions.

Other works that were included in the exhibition have fetched high prices at auction. The artist’s painting of monkeys in parliament, Devolved Parliament, also from 2009, sold for £9.9 million ($13.5 million) at Sotheby’s London in 2019, setting a record for the artist. (The record was recently broken when a painting the artist made for the NHS was sold for charity at Christie’s for £16.8 million ($23 million) this March.) Another piece from the “vandalized” series that was also included in the Bristol Museum show, a version of Rembrandt’s Self-Portrait at the Age of 63 to which the street artist added a pair of googly eyes, sold at Phillips in 2014 for £398,000 ($546,091).
Subject to Availability has been in the same collection since 2010, and the owner acquired it directly from the artist. It will carry a third-party guarantee.  It is on view at Christie’s King Street location until May 7 as part of the exhibition “Off the Wall: Basquiat to Banksy,” alongside 49 works of street art and graffiti, including work by artists Jean-Michel Basquiat, Kenny Scharf, and Os Gemeos.