As the inaugural exhibition of Nikola Mihajlovic’s Eastern European Artists program, Taglialatella Galleries welcomes Roman’s realist, Pop artworks to our New York City gallery for the summer season.  The exhibition premieres with an opening reception the evening of Thursday, July 21st, from 6pm to 8pm, and the show will run through August 11th in Taglialatella Galleries’ Chelsea Viewing Room. A portion of all proceeds from the exhibition will benefit the Eastern European Artists promotional program, instituted by Taglialatella Galleries’ Director of Eastern Operations, Nikola Mihajlovic, and designed in an effort to foster and encourage Pop Art in the global art market.

Roman produces monumental, colorful paintings that portray the ‘scenic’ events of ordinary life, and use figurative archetypes to explore social convention. His purposeful compositions and subtle contours speak to his exceeding talent as a painter; and his work elevates the every day to visual symbols of contemporary life. Striving to capture ‘reality observed,’ his figural motifs often speak to identity, authenticity, and relationships, particularly in the face of trendy and appearance-driven advertising. As in the Pop Art tradition, Roman draws from design, comics, and film influences, as well as from his own cultural experience, in order to imbue his subject matter with relevant and poignant symbolism.

Taglialatella Galleries exhibits paintings, sculptures, and works on paper by contemporary and modern masters with a focus on Pop and Street art. We feature Pop artists like Andy Warhol, Roy Lichtenstein, and Alex Katz, as well as Street artists like Mr. Brainwash, Banksy, and Shepard Fairey. We welcome Roman to the first of his solo shows in New York City, and are very much looking forward to our collaboration.

About Roman Djuranovic
Roman attended the Academy of Fine Arts in Sarajevo, and is one of the most celebrated contemporary artists in Montenegro today. Over the last two decades, he has received a number of awards, and participated in solo and group exhibitions across Europe— in Serbia, Montenegro, Austria, Slovenia, Spain, and Germany. Most recently, in 2011, Roman exhibited at the Modern Art Museum, CERMODERN in Ankara, Turkey, and in 2012, at the Pendulum Gallery in Vancouver, Canada.

For any further details or press inquiries, please contact gallery assistant Kathryn Fogarty at Kathryn@djtfa.com, or call our NYC gallery, (212) 367 0881. 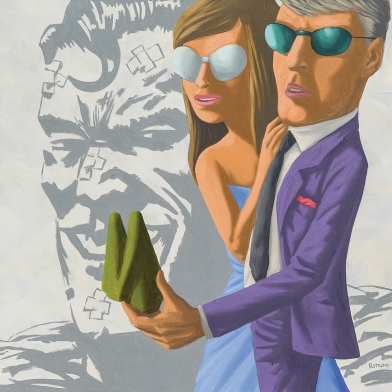 Taglialatella Galleries is excited to announce that we're introducing a new artist to our inventory, Roman Djuranovic! His Pop & Realist canvases will soon be on display in our New York City location, in a Pop Up Exhibition beginning July 21st...